BECOMING A LEADER THROUGH OPENNESS

The Brock University Faculty Association (BUFA) is concerned the university might move down the same path as York University by closing its searches for senior administrators.

That’s why BUFA must be pro-active to prevent increasing secrecy surrounding the hiring of senior administrators. BUFA is proposing that all short-listed candidates for the position of University President make public presentations to the Brock community, and that the university commit to continuing the same open practice for the positions of Dean, University Librarian and VP, said Dr. Linda Rose-Krasnor, BUFA President. Members of the community must then have an opportunity to provide feedback on the candidates prior to a hiring decision. Currently, Brock uses a similar open hiring process for professors and professional librarians.

That shared decision-making process is one of Brock’s greatest strengths and a defining characteristic of university governance. Transparency in hiring should be a priority for all senior administrators, but also Brock’s next president “because it sets the model for how decisions are made at our institution,” Rose-Krasnor said.

Otherwise, the university sends the message that things are done here secretly, she said, adding as a public institution, Brock has a mandate to serve the public good.

“An open process is also more likely to get us a candidate who shares the values we have of openness and transparency,” she said. “We want someone who wants to hear us, meet us and know who we are as a university.”

BUFA pushed for an open presidential search to replace outgoing president Jack Lightstone a couple of years ago. Instead, the university conducted a closed search and announced Wendy Cukier would take over in September 2016. However, a few days before she was to become the first Brock graduate to serve as president, Brock and Cukier parted ways.

That failed presidential search makes it even more crucial to conduct open searches for all senior administrators this time around.

“The general reasoning was that we would have better candidates (with closed searches) because we would end up with fewer people who are reluctant to put their name forward,” he said. “Confidentiality protects people from the awkwardness of applying with their current employer.”

However, there’s no strong evidence that that’s the case, he added.

“With closed searches, the committee is cut off from so much information about the candidate. You can’t go out and canvas people about these candidates,” he said.

Since York closed its searches, a much more divisive and adversarial relationship between administration and the faculty has emerged, Wellen said.

“Administration sees faculty as a group to be managed and controlled. There’s more of a top down approach to governance at the university,” he said.

York recently named its next president after a closed search that sparked controversy. The successful candidate, a current vice-president academic and provost, was not a popular choice. During the search process, YUFA conducted a poll asking whether there had been adequate consultation about the process “and the answer was overwhelmingly no,” Wellen said, adding the vast majority of respondents also said they would not support the candidate’s appointment.

“The comments were overwhelmingly negative,” he said.

Wellen said it’s important a university president is embraced by its community.

“If you are serious about the job, you do have to put yourself forward,” said Dr. Robin Vose, past-president of the Faulty Association of the University of St. Thomas (FAUST). “We don’t want a candidate who sneaks around the back of the university, someone who wants to conduct everything in secret.”

Through the open search process, the entire university community got the opportunity to voice their opinions, Vose said.

“(And that) took the wind out of the sails for opposition that could have been there,” he said. “Now you have to give that person a chance because the majority of people selected them.”

Not only does this process create more of a legitimacy to the candidate than if they are simply sprung on people, the candidates themselves know they legitimately won their position, Vose said.

“Can you imagine in a university department, the chair said to you: ‘In order to get the best professor, we’re going to present you with a secret candidate. Trust me,’” he said. “Who would want to be that professor?”

Dr. Suzanne Prior, former FAUST president, led the charge against St. Thomas University’s attempts to close its 2004 presidential search. It was a fairly contentious time, she said, and faculty were concerned about who was going to replace the then-president, who had held the post for more than 15 years, and wanted to have a say in his replacement.

“Also it was the principle of it. A president of a university has an impact on a university and at a small place they will especially have a huge impact,” said Prior, who received the Donald Savage Award from the Canadian Association of University Teachers in 2016.

“We were pushing on that, the issue of transparency, when all of a sudden, a faculty member popped in and said the last search was open and here is the proof,” she said. “So then it became… it would actually be a change in procedure (to be closed) so it helped us open it up.”

The faculty association launched a big campaign, putting signs up all over campus and the entire community rallied around the process.

“It was a powerful time,” she said. “We came together and had a positive experience.”

While the main argument against open searches is it will deter candidates from applying, Prior disagrees.

“You don’t lose your job because you’re looking for another one. People in administrative positions tend to move. It’s not unusual. These are not positions for life anyway,” she said. “If someone can’t come in openly, then I think they aren’t the right person.” 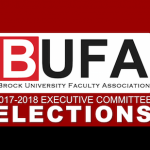